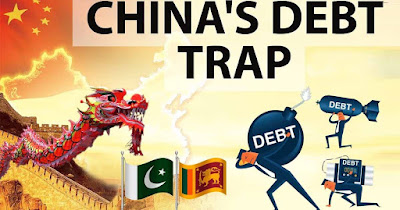 Hello World: Find The Trap Of China Or Get Wrapped In Its Trip Trap!


China has played a monotone of saying that they have become very responsible and has cast itself as an alternative power to the United states of America, claiming and casting itself as a munificient  responsible leader that triumphed where others have stumbled because of Corona Virus.

For the monotone can never become a symphony until all nations can be able to trust China, that is why we see that friendly nations to China like Iran have questioned China’s reported infections and deaths. While the European Union diplomats have warned China that aid cannot become a mask for its geopolitical ambition. One official delegate from Brazil suggested that the pandemic was part of China’s plan to “dominate the world."

We have seen right in the past years, China has used all countries for its own profit and in a matter of time have begun to control sovereign nations and have turned them in to "YES MEN" behind its back to be used to promote its own agenda in the United Nations.

President Trump has been wary of the authoritarian regime of China and have been critical of it in relation to the outbreak when it initially tried to conceal it and cause a world wide catastophe because of it. The World Health Organisation (WHO) which is a specialized agency under United Nations (UN) have danced to the China's tune and have become China-Centric which is the reason the whole world has been put under the arrest of quarantine, deadly deaths because of COVID-19 virus among the young infants to the middle aged to the older people alike have wrecked havoc in all the nations around the world while famine and food scarcity because of the lock down have begun to be the order of the day in poor and developing countries, and also in some developed countries alike while China tries to make a merchandise of the whole episode.

So what do we as the nations of the world really learn from it all?

As prime minister Modi of India said that he had learned through the whole Corona Virus episode until now, that in a globalised world, "we as a nation need to be self-reliant in everything."

Other leaders of the nations and unions of the world are in the same mood waiting and watching things unfold to say the same saga that in needed in their national policies regarding the issue of COVID-19, not only to solve this but also to avoid such blunders that have become blinders to a balanced and safe world view.

New York Times says, "When the outbreak subsides, governments worldwide will confront crippled economies, unknown death tolls and a profound loss of trust among many of their people. Whether Beijing can step into that void, or is pilloried for it, may determine the fate of its ambitions for global leadership."

China is very cautious in approaching the matter by turning the blame on other nation and even all kinds of wild animals for it, but does not even want to allow any investigators from USA and other nations or cooperate with any further investigation from what has already been found regarding the origin of Corona virus and its leak out of the laboratry. China is tightlipped because it is nervous of people finding the truth may lay claim with the internaitonal tribunal for damage caused by its intentional and specific reasons to lay seige to life saving information sharing with the world before it could spread in all other nations.

China has no more loop holes to repair the damage done to all the nations of the world. All have come to know that the crux of China’s narrative is its numbers coverup, which is a total bogus one to mislead the world through its lies. For example, China reported nearly 84,000 infections and about 3,300 deaths — a stark contrast to the United States, which has reported more than 399,000 infections, and Spain and Italy, each with more than 135,000.

All the world have come to know the insidious character of the staged human made crisis of COVID-19 which has gone out of hand of the Chinese, causing a rip off in all the nations of the world economy through selling of poor quality masks, rapid test kits that shows a completely opposite result, poor electronic thermometers and ventilators etc. Will China stop this?

As long as the world seeks for a temporary solution to crisis, the rip offs of China will only increase. Until China is restricted and stopped from issuing its own narrative to look like a so called leader,  China will undercount its victims and will mislead the world. The dragon knows only one thing, intimidation and destruction through causing fear and if others do not toe in to its line it dares to threaten of consequences.

First of all China cannot be compared to any modern democracies to contain the Corona virus effectively, because it has a top down dictatorial approach, while the great democracies of the world are bottom up humanitarian and egalitarian approach to it. Even though it takes more time and more dangers of death due to virus, that is the price each nation that lives on the ideal of a democratic set up pay to hold the great value of democracies intact which China can never understand. Kudos to all democratic warriors who value life, (i.e.) human life more than money and economy, so that a heartless totalitarian set up should never be showered with any petals of appreciation.

Though China says it has supplied medical equipment to 120 countries, officials in Italy have said that many of the so-called gifts are actually exports. Other countries have complained of faulty test kits and masks that must be returned back to China as it is of no use in fighting the deadly virus. Europeans have warned China that "politics of generosity” cannot undermine European solidarity against massive misinformation.

While China’s global propaganda machine has also grown massively and also becoming increasingly sophisticated with misinformation and foxy self-benefitting campaign, everybody is pushing against the misinformation and false Chinese narratives that misguides the world in to chaos and fear, regardless of borders a solidarity will come out of this.

I would say to be victorious in the 21st century, a global alliance of all nations should come together to destroy the trap the Chinese have set by isolating it, or else soon expect to get trip trapped and wrapped in it after which those trapped will be a good slave to the madness of its master, the end time dragon.

Posted by Abraham Israel I at 2:32 AM

Email ThisBlogThis!Share to TwitterShare to FacebookShare to Pinterest
Labels: China

END OF THE ENDTIME NEWS!

About The Editor & Author

Abraham Israel is the President and Founder of this WEBSITE : www.apostolicrevelation.info. Abraham Israel is a Apostle, Bible Teacher, Pastor and a Preacher of the Word of God who loves to dig out the truths of the Bible and bring it out in a revelatory and inspired way. He loves to write under the Anointing of the Holy Spirit, and his only desire is to see people enter in to the Kingdom of God and shine forth as the stars that are in the sky for the Glory of God, in this final season of the end time harvest before the Second Coming of Jesus Christ!! This Apostolic Revelation website through which the Apostolic Articles for Kingdom Living is birthed from, is based on the vision of a True Apostolic Church that God has given Abraham Israel to establish, called Household of Faith Church and World Outreach. This trans-denominational Parachurch organisation will focus mainly on apostolic teaching that will empower and equip the saints to reach their full potential in Christ Jesus. Our vision statement is: Bless the city, Reach the nation, Arise and shine to the nations! Our goal is the edification, evangelism and empowerment of the last day Church the Lord Jesus Christ is raising up, before His triumphant return! Please feel free to email the author if you have any questions or comments or any prayer requests you may have to :